The 32 acres where Skyway Park is located have been, for the most part, untouched since the site was cleaned up decades ago.  Much of it has been reclaimed by nature. The southwest section, near where Sip Creek meets the Hackensack River, is particularly wild and thick with vegetation.  Dominated by phragmites, plus a few small groves of sumac, it is home to many critters.

Twice this year we have seen a red fox.  While we do not have any photos, we know that they live in the area and hunt rodents and snakes.  There is also a colony of groundhogs (woodchucks) that live on the hill behind the warehouse.

Recently, we found the body of a dead skunk on the walkway.  It was probably dropped there by a great horned owl.  Like skunks, owls are nocturnal and skunks are among their preferred prey.  The skunk remains did not smell, as it is their spray that is potent and the desiccated remains would have lost most of its odor anyway.

We also saw a small hissing snake.  When the park is completed and open to the public, we expect some of this wildlife to disappear from the site.  But we hope that enough of the park remains wild and can serve as habitat for these small creatures. 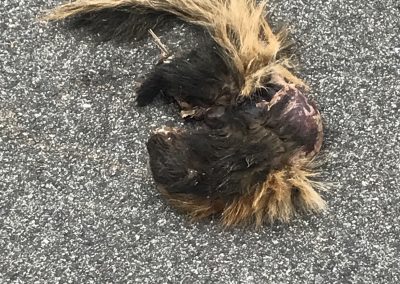 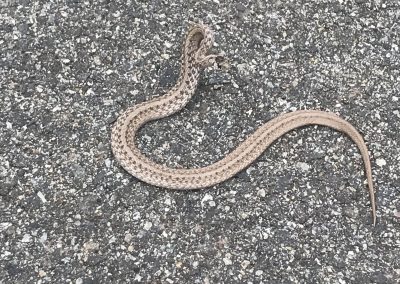